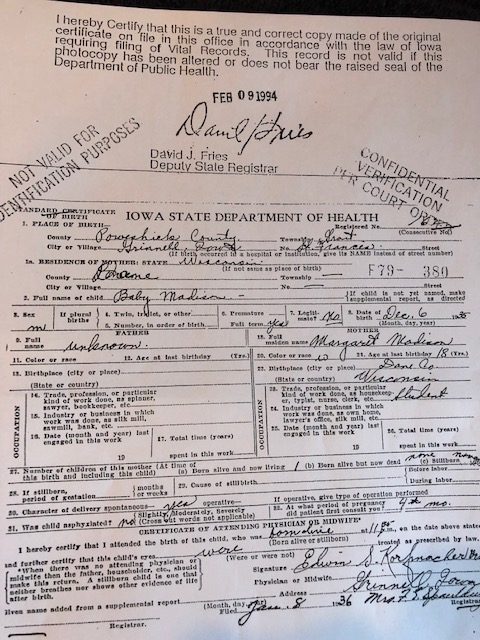 An epic journey to find my roots has happened at exactly the right time. The search came in earnest some 83 years after my adoption in Grinnell to an unwed mother from Wisconsin. The birth was at the St. Francis Hospital December 6, 1935 and the adoption was immediate as far as I know. My adoptive parents were a couple from Grinnell in their 40’s unable to have children. I knew from the beginning that I was adopted, I had no reason to know anything different and my parents were more than loving, supportive and enjoyed giving me the tools to grow. Everything was in order so I had no reason or desire to search for my birth mother during the early years and the birth certificate listed my “father” as “unknown” so that search was out of the question.

Some years later my adoptive parents were both gone, I was married with 3 grown daughters and in my early 60’s. The curiosity arose to do at least a minimal search to determine the possibility of difficulty. It was now in the mid 1990’s. I hired a private genealogist to do some investigative research. The birth certificate and adoption papers had always been accessible but I had a court order to open the adaption files with the clerk of court, Poweshiek County, Iowa for more information than was on the birth certificate . At this time all we knew was that she (my birth mother) was Margaret Madison, Dane County, Madison, WI. and the fathers full name was listed as “unknown” and court documents provided no additional information. The court documents provided no new information.

The investigator at that time enlisted another genealogist from the Wisconsin (Madison) area that did find a Margaret Madison from Kenosha and indicated that if I wanted him to go further just let him know. Some time had been spent on the search so far and I was not driven to really go further. We must remember that the search was not nearly as sophisticated as today and much more energy was need to research his latest find. So the search was shelved for the time being.