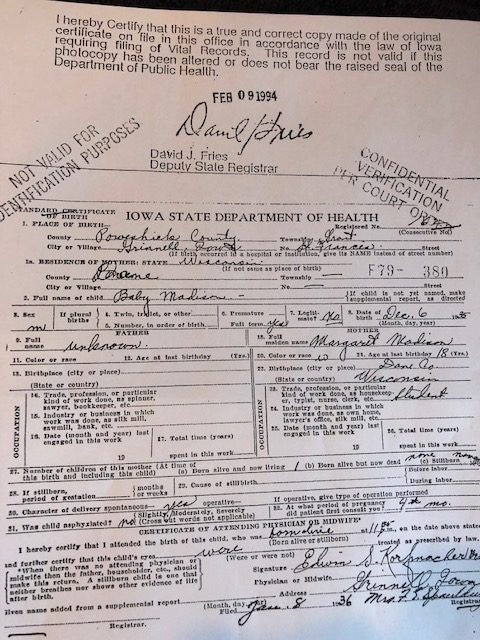 As a sort of introduction and to bring everyone up to date quickly the following is all about my adoption in the mid 1930’s and a bit of what has transpired since then.

Fast forward to November of 2018 when my daughter Sally found a historical blog link in “You Know You’re From Grinnell Iowa When” titled “Illegitimacy and Abortion in 1920’s -1930’s Grinnell”  by Dan Kaiser, Professor Emeritus of Russian History at Grinnell College that mentioned my birth mother’s name. My daughters Sara, Sally and Sue had always been curious about my birth mother mostly because of health and issues that could possibly pop up in later years. Heritage was of curiosity also.

The article was generated because of a most unusual find at a flea market in What Cheer, IA that listed the admissions to the St. Francis Hospital in the 1920s and 1930s. Information in the admissions book provided some new clues that aided in the search for my biological mother that we had not previously seen. The admitting doctor and hometown entry of Margaret Madison provided new information that were invaluable.